I had the pleasure of adjudicating at the Vienna IV debating tournament this weekend just passed. Vienna is an amazing place and it was nice to meet people from different countries. (Teams were from 20 other countries in all from Europe, Asia and North America).

The topics were as follows:


Round 1: This House believes that juries should only include individuals that are from the same socio-economic class as the defendant.

Round 2: This House in hindsight would still have fought the 2003 War in Iraq.

round 3: This House would, as an atheist, join an atheist church.

Round 4 motion: This House believes that school children in the UK should be taught that their country engaged in war crimes.

Round 5: This House, as the heir to any European throne, would refuse to become a monarch.

Round 6: This House believes women are morally justified in lying about their past experience, abilities and future family planning at job interviews and applications.

You are an emigrant from a poor and collapsing unnamed country. You are offered full and immediate citizenship from the United States and the European Union. The offers are the only two options you have and are mutually exclusive. You do not know where you will live in either Union. Your native and only language is not spoken in either.

This House would emigrate to the European Union.

Vienna IV 2013 final motion: This House would hold a referendum among all churchgoing Catholics to elect the new Pope rather than having Cardinals elect him.

---
It was a great experience overall, but unfortunately despite some attempt to secure my things, it wasn't enough and my wallet and my Australian phone got stolen on the train on the way back which also included my apartment keys. This also means that I lost all the pictures that I took bar this picture of the Grand final which had teams from USA, Germany, Israel and Romania: 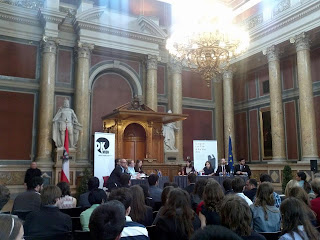 The upside is at least I will be far more vigilant in the future and it consequently will likely not happen again. That is about the only upside really.

Speaking of the grand final, it was one of a select few that actually delved into theological arguments, which are rare in debating but made it certainly a very interesting debate. There is something also quite entertaining about a team from Israel getting up and teaching the European teams about Catholicism.

Also, we are still going through stuff for orientation and paperwork for residency. So much to do.
Posted by ajcullen at 6:44 AM